A lot has happened. Just when I really thought I was recovering, I started experiencing increasing incidences of shortness of breath. I had mentioned to several of my doctors. As this could have been a symptom of my recovery, I got lulled into complacency -- until my daughter came to town. I wrote a lengthy explanation of what happened to share with my family. For many of you, I am sure this is too much information. However, for those of you who are curious about pulmoary emboli, blood clots in the lungs, you may be interested in reading farther. I include this as part of the documentation of my breast cancer journey. Looking forward to 2021.

Let me provide you with an update. Feel free to read as little or as much as you want.

You may have seen on Facebook that Liz, Roland and the kids met Bill and me at Summit Park in Blue Ash on Saturday, the 19th. We hadn’t seen the grandchildren in six months, so we agreed to meet outside, wearing masks, so we could at least see each other. After the visit, I was walking to the car with Roland and he was surprised at how short-of-breath I was. Meanwhile, Bill was walking with Liz, and he told her how bad my breathing was at night and that I was gasping for air after simply going to the bathroom and that I stopped breathing at times. It was scaring him.

Liz and Roland compared notes on the way home. Liz knew that I was complaining of shortness of breath and had told all my doctors about this, but it was getting worse. I was under the impression that some shortness of breath was not surprising, given the extensive surgery I had on August 19th.

On Monday, my shortness of breath was not improving. I was on Day 4. Liz, who I joke “thinks she is my doctor”, contacted two of her hematologist doctor friends who suggested to her I probably needed to go to the ER and needed to “take this seriously.” My oxygen levels were also getting lower and lower unless I was sitting in my chair.

Liz called me and insisted that I get in touch with my family physician. She gave me until 5:00 PM to come up with an “action plan.” At 2:00 pm, she called to find out what steps I had taken. I set up a video visit with my family physician. She said I needed to go to the ER because I needed to get a diagnosis quickly, including blood tests that would be quickly turned around in the ER. I got to the Christ ER about 5:00 pm.

I have a history of heart arrythmias, and when they hooked me up to the monitors, they were on full display. You can see the results of a 12-lead EKG they gave me once admitted to the hospital. And this was an improvement.

The ER doc was convinced I had pulmonary emboli and scheduled me for a CAT scan. I had to wait a couple of hours for the machine. Tom knows what it is to have a DVT where the fear is that a clot can move to the lungs. These can be fatal. What’s strange is I had no evidence of DVT.

The CAT Scan showed that I had “bilateral pulmonary emboli involving both upper and lower lobes.” In English, I had blood clots in both lungs and in both lobes. I also had some “postoperative fluid” that will require follow up by my oncologist. They don’t know what the fluid represents, but “residual/recurrent malignancy cannot be excluded.” I have an appointment with him January 5th.

I don’t pretend to be a radiologist, but if I understand this correctly, the two images from the scan show clots identified with arrows. They told me that when they add the contrast dye, the clot starts where the white contrast ends. 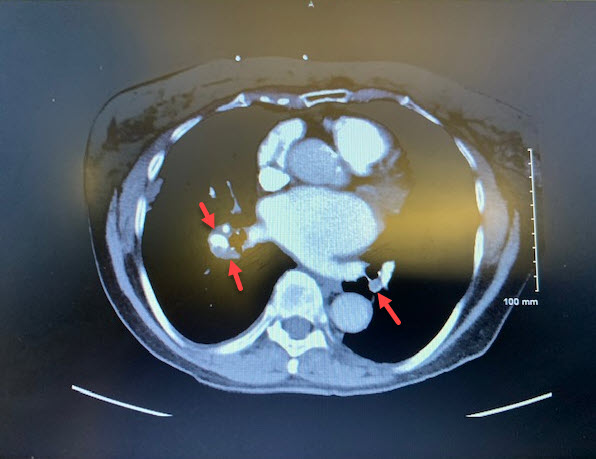 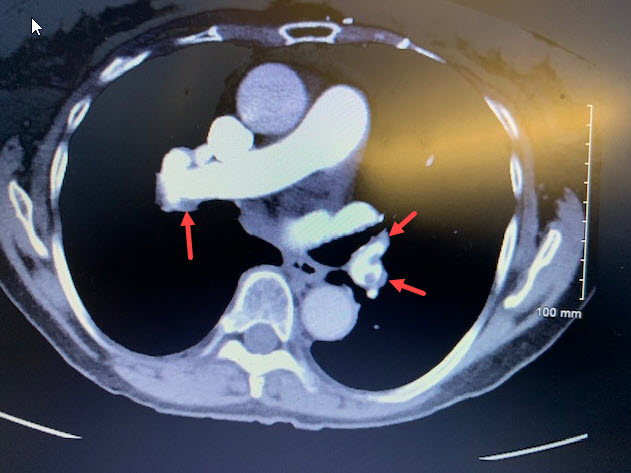 Once they admitted me, they treated me with a heparin drip (blood thinner). The next day, they switched me to Xarelto, an over-the-counter blood thinner that they say I will have to be on the rest of my life. They anticipate that my body on this medication will be able to dissolve the clots and that within a couple of weeks I could see an improvement of about 60%.

When I came to the ER, they assigned me a PESI score that put me in a Stage IV, high risk category. This is largely based on my age, the fact that I have had cancer and meet several criteria for blood clots (Factor V Leiden, obesity, history of arrythmias, and relatively recent surgery). This could have resulted in a very bad outcome for me, because I am now stable and on blood thinners, my odds have vastly improved.

So there you have it – probably more than you ever wanted or needed to know. I obviously have some things that will require follow up. Should I learn anything significant, I will be sure to let you know.

Join the conversation. Comments are appreciated and keep me motivated.

This blog has been a labor of love. It is my hope that by sharing the stories of our ancestors, we will grow in appreciation of all those who came before us. The easiest way to find information on a particular surname is to use the search box below. The posts are arranged in a generally sequential order with the most recent post on the top. To read the oldest post first, use the blog archive. Questions? Email me at khreed@cinci.rr.com.