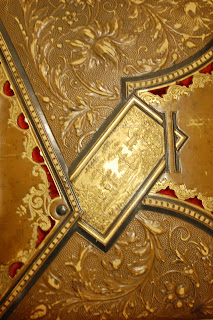 Loah was the granddaughter of Ann Eliza Wainright


Yesterday my family history companion, Julie Jones, traveled with me to Ohio University in Athens, Ohio. As part of the Alden Library, there is an archives collection that I've linked to this post. I discovered about six months ago that they had housed in their collection scrapbooks, diaries, photo albums, etc. that had been put together by the Broadwells and related families.

Ann Eliza Wainright, sister of Britton, married Henry Broadwell from Mt. Carmel, Clermont County, Ohio. I discovered that both the Wainrights and Broadwells had come from Morristown, New Jersey to Ohio. The families probably knew each other there.

Henry and Ann Eliza Broadwell had as many as many as 11 children. Married in Cincinnati in 1834, the family is listed as living in Canaan, Athens, Ohio in the 1860 Census.

Although Ann Eliza is not in my direct family line, as a sister of Britton, I was interested in what I might find. IT WAS A GOLD MINE!

In one of the diaries I found an entry written by Ann Eliza Wainright Broadwell on her 50th wedding anniversary. She is saddened by the fact that this is the second year she's had to celebrate the anniversary without her husband. 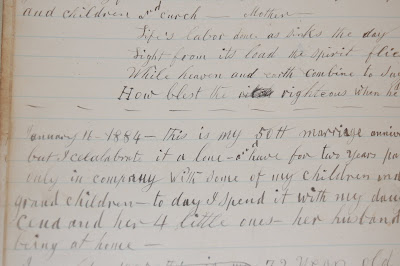 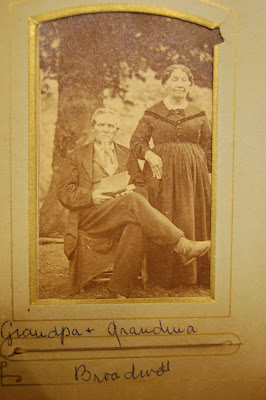 Loah was a child of privilege. The archives had a scrapbook from her time as a student at Ohio University. I think she graduated in 1915. It held rent receipts ($7.10 for three weeks of board), dance favors, tickets, sorority items, etc.

There was also a "sewing book" that she had created for her sewing class at OU. It had neat samples of various types of stitching, hemming, button holes, pockets, etc. She was very talented, but it made me wonder what her major was. 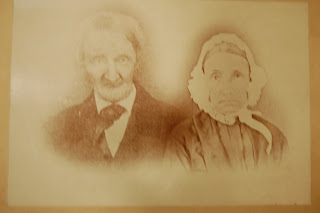 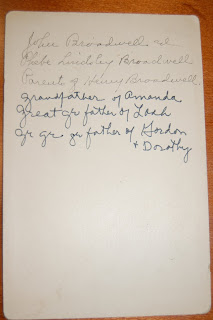 There was a priceless picture of Henry Broadwell's parents, John and Phebe Lindsley Broadwell. Boy, does she look happy. We photographed the back of it where it listed their names and the names of some descendants. 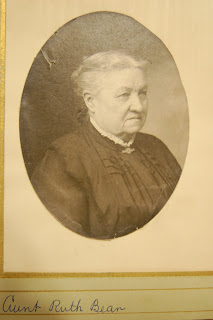 The photo album identifies this as a picture of Ruth Broadwell Bean. Ruth was one of the children of Henry and Ann Eliza. I'm sure she was named after her grandmother, Ruth Wainright.


Which leads to the best find of all. In the album was a picture of "Grandma Wainright." I believe it is a picture of Ruth Wright Wainright, wife of William and mother of Britton and Ann Eliza. 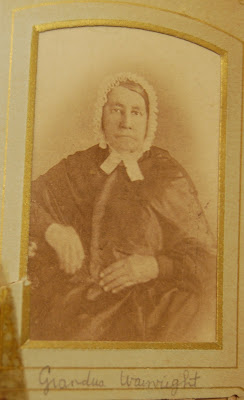 The notes on the back were not very clear, but also described her as the Great, Great Aunt of someone whose name I cannot read. I made sure to copy the picture with the handwritten identification in view.

If you follow the link attached to this post, you can read in detail about the materials they have housed in the archives. Luckily for us, someone had the forethought to donate these materials.

Note: You can click on the title of this blog entry and be linked to the information re: the files held in the archives at Ohio University.

Join the conversation. Comments are appreciated and keep me motivated.

This blog has been a labor of love. It is my hope that by sharing the stories of our ancestors, we will grow in appreciation of all those who came before us. The easiest way to find information on a particular surname is to use the search box below. The posts are arranged in a generally sequential order with the most recent post on the top. To read the oldest post first, use the blog archive. Questions? Email me at khreed@cinci.rr.com.